Joining forces for the first time ever, The Meltdown Sisters have appropriately named themselves to honor and celebrate the Durango Meltdown, and the re-emergence of live music on its many stages. 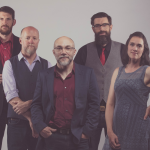