Bruce Molsky is a revered ambassador for Appalachian and old-time music. Tony Trischka is a founding father of progressive bluegrass. Together they are a force on stage. Multi-instrumentalist Bruce Molsky has toured throughout the world, garnered two Grammy nominations, and gained the reputation of old-time Appalachia’s musical master. Trischka, in his long career in progressive bluegrass, has upended all previous notions of what a banjo is for. He has inspired and supported musicians from monster banjo innovator Béla Fleck to Steve Martin, the banjo’s unofficial celebrity ambassador. Together, Bruce and Tony will perform traditional and original songs, old and new, that honor Appalachian musical heritage, presenting bluegrass and mountain music in a way the Meltdown audience has never heard before. 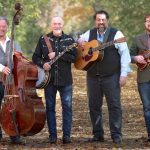