The Blue Moon Ramblers are comprised of five Durango-area musicians and singers, who have been performing professionally for over four decades.  Collectively, the band is known for being the Sunday Night house band of the Diamond Belle Saloon at the Strater Hotel in Durango, Colorado.  The group has performed in various configurations for the “Strater Family” over 1,800 times.  George on banjo, and Red on fiddle are the co-founders of the band, and together they are the only musicians to perform at every single Durango Meltdown.

George was influenced by urban folk artists and New Grass styles, Red was influenced by the Outlaws and Highwaymen and the fretless sounds emanating from the pedal steel guitar, (Red would like to be a dobro player, too, when his fingers wear out…), Glenn brings his smooth bass playing from a deep resumé of performing with national acts, both on stage and in the recording studio, and was an original member of the Left Over Salmon band, and Jenny brings her wealth of experience and outstanding singing and guitar playing based on playing as a folk artist in the Durango area since 1973.  Red’s wife, Moana, has fulfilled her dream to sing leads and harmonies to songs that she listened to for years, and is now a wonderful contributing member of the band.

The Blue Moon Ramblers perform their signature arrangements with their bluegrass instruments, playing many different genres and styles of music that each member enjoys to bring to their collective experience. 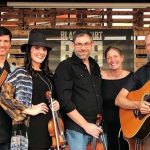