A mainstay of Old Time music in Colorado for over a decade, the members of Six Dollar String Band play a passionate, eclectic, and refreshingly honest array of String Band music native to their home in the Centennial State.

The band‘s most recent recording project is their most ambitious to date, yielding two separate albums entitled “Big Six” and “Fire On The Mountain”—the latter released as a double vinyl LP.  They were both recorded on location during a residency at Willowtail Springs in Mancos, Colorado. 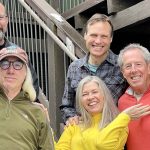 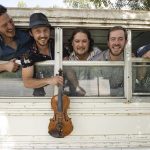